Former president Donald Trump and two rioters were sued for the wrongful murder of late officer Brian Sicknick’s long-term partner following the Jan. 6 incident.  Sicknick was a member of the police line manning the U.S. Capitol on the day that pro-Trump protestors tried to prevent legislators from approving President Biden’s Electoral College victory.

A $10 Million in Damages Per Defendant

On Thursday, the case was submitted in the U.S. District Court in Washington was held the day before the attack’s second anniversary. Each defendant is being sued for at least $10 million in damages.

Brian Sicknick’s estate is being represented by Sandra Garza, who asserts that the murder of her partner was a direct and predictable consequence of Trump’s remarks that day. Additionally, she holds Julian Elie Khater and George Pierre Tanios accountable for allegedly using chemical spray to abuse Sicknick during the breach. The lawsuit claims that Sicknick was sprayed with chemicals during the altercation and passed out later that day. He had two strokes and passed away the next day, a source said. 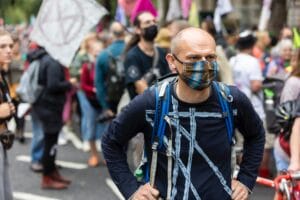 It was a Natural Death

According to a report from two years ago, the USCP supports the Office of the Chief Medical Examiner of the District of Columbia’s determination that Officer Brian Sicknick passed away naturally. However, this does not diminish the fact that Officer Sicknick bravely defended Congress and the Capitol before dying in the line of duty.

The chief medical examiner’s office stated in a report summary that Sicknick passed away from strokes, citing acute brainstem and cerebellar infarcts brought on by acute basilar artery thrombosis. Sicknick’s death was ruled to be natural despite being sprayed with a toxic agent.

Sicknick had two strokes at the base of his brainstem, according to chief medical examiner Francisco Diaz, which were brought on by an arterial clog. Although the autopsy revealed no signs of internal or external injuries or an allergic reaction to the chemical, Diaz claimed that everything that happened contributed to his condition.