A TikTok video purportedly showing Jordan Douglas Krah, 40, of Denver, hurling homophobic and racist remarks at a Korean American man and woman eating at a California In-N-Out Burger led to his arrest on suspicion of committing a hate crime, according to the police. San Ramon police apprehended him on Monday, and they booked him into the Martinez Detention Facility on two counts of committing a hate crime.

On Christmas Eve, while Arine Kim and her friend Elliot Ha were filming a TikTok video of Ha’s response to Kim’s food order at an In-N-Out Burger in San Ramon, Krah came over and began ranting in a homophobic and racist manner.

Krah interrupted them and asked if they were recording themselves eating; when Ha replied that they were, Krah started calling them “weird homosexuals.” Krah threatened to spit in Ha’s face and use a homophobic slur. Due to the threat, Ha and Kim waited until the restaurant closed before the staff walked them to their car; Krah had previously said he would wait for them outside.

Krah is still detained, and it is unclear if he retained a lawyer to represent him in court, a source posted. 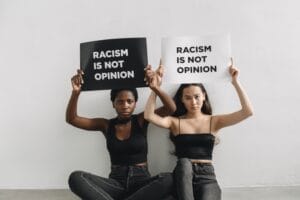 According to the most recent report on hate incidents and hate crimes committed against Asian Americans and Pacific Islanders in the U.S., nearly 11,000 were self-reported to the organization between March 2020 and December 2021. Women reported almost 62 percent of those incidents.

A survey also revealed that 83 percent of Asian American parents are concerned that their children may be bullied because of their race or ethnicity and that Asian American men are equally likely to experience hate crimes and hate incidents but are less likely to report them.

Along with early reports of COVID-19 in China, anti-Asian American attacks and boycotts of Asian American-owned businesses started to increase in January 2020. At Sam’s Club in Midland, Texas, in March 2020, a man brandishing a knife attacked Bawi Cung and his 6-year-old son.