During a court hearing on Tuesday afternoon, Judge David Navarro kept Deray Calcote, 23, in custody without bond. During a Monday traffic stop in Chicago, Calcote was caught carrying an automatic weapon in his jacket pocket; police allegedly found a loaded handgun with an automatic fire switch in Calcote.

Around 11:30 a.m., Calcote had his ankle monitor on Monday; he was stopped by police while riding in the backseat of a woman’s car in the 2700 block of East 79th Street. When police asked him and the woman to exit the car because the woman’s driver’s license was suspended, they allegedly discovered an ammunition magazine in his pocket.

Prosecutor Sarah Dale-Schmidt claims that Calcote informed police that the switch was already installed when he purchased the weapon, which was necessary for his protection, according to cwbchicago.com report.

According to Calcote’s public defender, the man works as a delivery driver for a catering business, attends Rock of Ages Church, and is the primary caregiver for his dementia-stricken grandmother. When police pulled them over on Monday, the attorney claimed that Calcote’s mother was operating the vehicle. 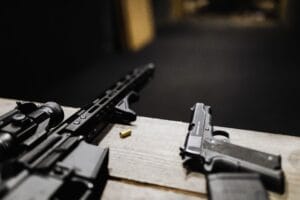 In 2015 and 2017, the juvenile court convicted Calcote of gun crimes; in 2019, he was found guilty of aggravating unauthorized weapon use. Police discovered Calcote hiding a gun with an extended magazine under the rear floorboard.

In October 2020, police allegedly pursued Calcote after he fled from a car parked near a home where they were conducting an investigation. Police claimed to have observed him throw a loaded 9 mm handgun with a 27-round drum magazine over a fence while they were pursuing him, a source posted.

Despite the Class X accusation of having an armed habitual criminal record brought by the prosecution, the judge discharged him on his recognizance. Due to his absence from court, Calcote must pay the court $3,000 by July 2021 to pay the bail he was supposed to post. After failing to appear in court once more in November 2021, the prosecution claims that Calcote owes an additional $2,000 to be allowed to return home while being monitored electronically.