Although the past days had gorgeous weather especially in the morning, with just a slight hint of hot but not humid in the afternoon, a potential tropical system may make landfall in the state early next week and change the current beautiful weather, experts say.

A few more days of the same weather condition is expected. On Saturday, morning temperatures in the low-to-mid 60’s should steadily warm int other low-to-mid 90s with just a hint of humidity but a lot of sunshine.

On Sunday, the weather changes a bit as some humidity will start to go back to the atmosphere. In the morning is still a comfortable mid-60s but a warmer afternoon is expected with a hint of a little breeze due to the partly cloudy skies and humidity increase.

The rain chances on Sunday are about 10% mainly in the Brazos Valley. The smoke will continue to move upwards in the atmosphere during the whole weekend, which will reduce the air quality and will bring hazy skies. 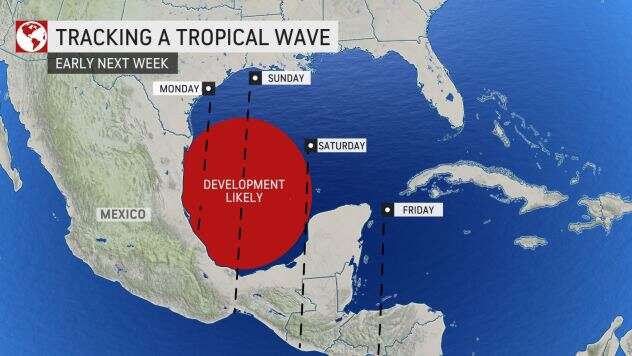 According to the National Hurricane Center, a tropical wave over the western Caribbean is highly expected, with a 60% chance of developing later this weekend and early next week. It will enter the Bay of Campeche and western Gulf of Mexico.

The tropical wave is being monitored closely because it is likely to make landfall as either a tropical depression or tropical storm in Mexico or Texas, on Sunday or Monday.

No matter how strong the winds are, the wave will surely bring rain. The highest rainfall totals will be close to the coast from South Texas and possibly all the way to Louisiana (depending on the track of the system) with 4” to 6” rainfall totals next week.

With the disturbance’s track, some rain is already expected early next week. Right now, chances of rain are highest on Monday and Tuesday but may still change as it moves.

A forecast of rainfall totals between a quarter inch and an inch is seen by the end of the week. If the disturbance stays near to the coast, rain chances will go down but if it pushes farther inland, then we might experience more rain.

But wherever the disturbance trails, a warmer temperature is expected in the morning, cooler in the afternoon, and the heat index must be factored in as well.