There have been no reported arrests, and no suspects are in police custody. The incidents have been reported to all law enforcement agencies in the county, and they will all be keeping an eye on the power substations nearby. According to the Pierce County Sheriff’s Office, the attack’s motivations and whether it was a coordinated attack on the power systems remain unknown.The acts of vandalism were followed by numerous instances of similar sabotage across the nation.

According to the sheriff’s office, two break-ins occurred at Tacoma Public Utility substations, and two others happened at a Puget Sound Energy station. The suspects broke through the fence to the enclosed area, where they vandalized the machinery that started the fire, a source posted.

The substation attacks happened between 2:39 and  7:21 p.m. on Sunday local time. According to the sheriff’s office, the saboteurs entered the gated power plants in all four episodes and purposefully harmed the machinery. According to authorities, an intentionally started fire near the city of Graham damaged the fourth substation, cutting off power to homes in Kapowsin and Graham. Initially, authorities said three power stations had been vandalized. 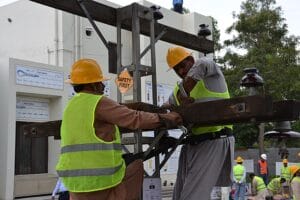 The alarm has been raised, and a series of attacks on power facilities in Oregon and Washington have highlighted the vulnerabilities of the US electric grid. The attacks in the Pacific Northwest are comparable to the attack on the power plants in North Carolina, which resulted in the loss of electricity for 40,000 people.

KUOW Public Radio and Oregon Public Broadcasting were the first to report that there had been at least six attacks, some of which used firearms and left locals without power. Two of the attacks resembled the shootings in Moore County, North Carolina, which involved two radio stations. Authorities have not yet given a reason for the attack in North Carolina, according to theguardian.com report.

The four utilities in the Pacific Northwest, whose equipment was targeted for the attack, have stated they are working with the FBI. Unfortunately, the organization has not yet made it official that it is looking into the incidents. Who is responsible for the series of assaults is still a mystery.