Trump is seeking reelection in two years, and McConnell said in a rare and harsh critique of the former president that his influence is waning and urged him to refrain from Senate primaries. Particularly about the 2024 presidential election, McConnell doesn’t seem to believe that the former president is the GOP’s future.

The Kentucky senator claimed that Trump’s political influence had decreased in an interview with NBC News last week. In McConnell’s not-so-subtle interview, Donald Trump may have received a strong indication that his support is not needed in the upcoming contest.

The candidates that Trump backed did poorly in the midterm elections, and he claimed it served as a warning to Trump that he would lose the 2024 race to Biden. The Republican Party, according to McConnell, is less likely to accept the cards that may be dealt to them, a source posted. 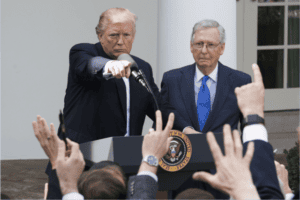 Trump was also held accountable by McConnell for damaging the party’s reputation among critical independent and swing voters, who turned down GOP Senate candidates in the states that determined the outcome of the election. He claimed that the party’s performance was “fatal” in Arizona, New Hampshire, and Georgia and disappointed in “every state” – including the red state of Ohio, which Republicans narrowly won.

They could have spent a lot of money trying to find a different candidate and maybe failing, McConnell claimed, so he concluded that they should play the cards given.McConnell wants to put the GOP’s terrible Senate campaign behind him and take advantage of various windows of opportunity to gain the majority in 2024.