Pablo Patino Bustos, 28, is being jailed on a $4.5 million bond after he threatened police, attacked his wife with a car, and set fire to the home where his estranged wife and his 11-year-old daughter were sleeping. When his wife and daughter went to his in-laws’  Spring house after his incarceration in December for allegedly assaulting his wife, he was captured on a doorbell video setting fire to their residence.

On Tuesday, he was seen starting a fire on a doorbell camera, and investigators claim that he hit his wife with the automobile as she fled the burning house. Before being charged with two counts of arson, one count each of aggravated assault, violating a protection order, and making a terroristic threat, he was sent to the hospital, a source posted. 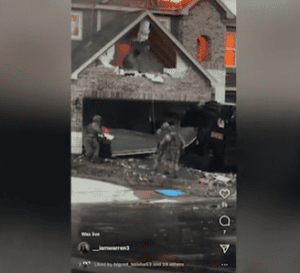 On Thursday, when his wife and deputies returned to the residence to gather their stuff, Bustos was there. The police set up the SOU team and K9 to come out and clear the house, go inside, and discover Bustos there since they knew he was violent.

In an effort to persuade him to turn himself in, the constable’s office deputies withdrew and summoned a SWAT team. However, as they negotiated with him, the house caught fire again, so officials convinced him to flee the burning building.

After an hour-long standoff in Spring, Texas, Pablo Patino Bustos was seen on film escaping the roof of his home, which he later set on fire. When police saw Bustos, who claimed to have a gun, they drew back and established a perimeter as they continued to search the home.