On Thursday, Keylin Daveyon Hollins, 20, was charged with capital murder in the killings of Jennifer Hernandez, a 20-year-old mother, and her unborn child, as well as aggravated assault for hurting Hernandez’s 17-year-old boyfriend. Four months after the killings, the verdict was made official.

Thursday morning’s court appearance comes nearly four months after a young mother-to-be was fatally shot in north Harris County. A court set his bond at $1 million for the capital murder charge and $50,000 for the aggravated assault charge. Additionally, his previous felony bonds were raised to $40,000 and $200,000, respectively.

At the time of the shooting, according to Harris County sheriff’s deputies, Hollins was out on bond for two felonies related to theft and tampering that occurred in February and April of 2022, a source posted.

According to deputies, Hernandez and her boyfriend were fired many times near Airtex Drive and Ella Boulevard after they had just exited a Shell gas station. Hernandez and her unborn child were slain, and their automobile had numerous bullet holes in the doors and windows. Despite receiving two shots, the boyfriend survived, and he allegedly told deputies that before shots were fired, they had no contact with the white automobile the shooter was driving. 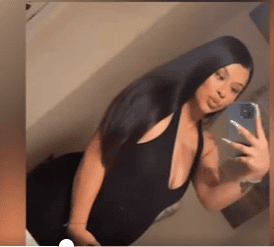 Calling Her Mother in Her Final Moments

At the time of the incident, Hernandez was eight months pregnant with her first child, a  boy, and one day before her baby shower, they were shot and killed.

Family relatives told us the victim was delighted about the pregnancy and a shower they’d planned for that weekend. The young woman they called “Nana” had recently opened her nail salon, but instead, they found themselves organizing a funeral.

According to a witness who hurried to aid the injured couple, Hernandez was on the phone with her mother in her final moments. Her mother kept calling and requesting information about their location, and the witness provided the details. Hernandez couldn’t survive, the witness informed the mother, so she should go where they were.