On Friday, GOP lawmakers had already submitted 20 bills in the Texas House and Senate in relation to Texas new voting laws. Republicans are setting the stage for swift action on many new changes, including a proposal to establish an election police force akin to the one Florida implemented before the 2022 midterm elections.

Texas bills sponsored by Republicans call for the establishment of a system of “election marshals” who would look into claims of infringements of election and voting laws, bring charges when necessary, and report directly to the secretary of state of Texas. In addition to having extensive subpoena power over people, records, and equipment, they can “impound” election records and election-related equipment.

The proposal aims to change the classification of election and voting rights crimes from a misdemeanor to a felony. In the nearly two years that have passed, a few conservative state lawmakers, including Abbott, have made their desire to reinstate those violations as felonies known, a source posted. 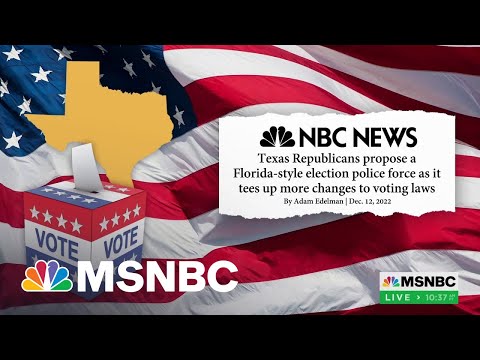 According to HB 125, the state attorney general would be able to impose civil fines of up to $25,000 per violation on local prosecutors who fail to enforce or prosecute election and voting laws. In addition, the proposed legislation would give the attorney general the power to oust local prosecutors from their positions if they are not fully enforcing or prosecuting election and voting crimes.

The proposals have alarmed voting rights advocates and state Democrats who attempted and failed last year to block a GOP-backed overhaul of election laws — a priority of Governor Greg Abbott — in the wake of former President Donald Trump’s false claims that massive fraud cost him a second term.

However, supporters point out that in the state, where Republicans currently hold both chambers of the Legislature and the governorship, most aren’t likely to advance.

Texas Democrats have also been active, having profiled 42 bills that all, in different ways, seek to loosen current voting and voter registration restrictions.