A video that was shared on social media claimed to show a teacher in South Florida interrupting Muslim children who were praying. As a result, the teacher lost her job over the incident.

The alleged assault took place at Franklin Academy, which is located in Pembroke Pines and is a public charter school. The video, which was uploaded to TikTok on Wednesday, shows two Muslim students reciting a prayer in Arabic before a woman’s voice cuts them off.

The video has now gone popular on the internet.

In a viral TikTok video, there was a whistle, and the person who is thought to be the teacher appeared to step over the Muslim students who were praying, NBC Miami reported.

After becoming aware of the video, officials at Franklin Academy said in a statement that they wasted no time in conducting an investigation into the matter. 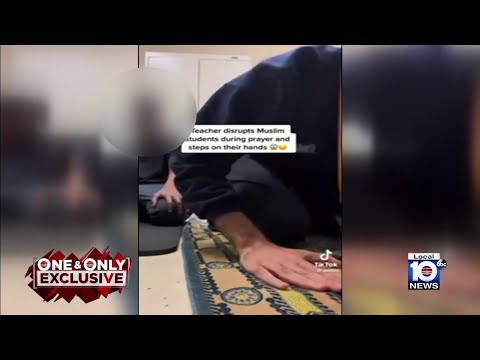 It was stated in a statement that an extremely disturbing TikTok video was shared with the leadership team of their school.

The video appears to show a teacher interfering with a moment of prayer that the Muslim students are having. As soon as they got the footage, the people in charge at the organization and the school started looking into what had happened as soon as possible, according to the statement.

Once one of Islam’s five daily prayers has begun, neither outsiders nor Muslims who are participating in the prayer should do anything to disrupt it.

NBC News stated that Muslims hold these prayers in very high regard. During the prayers, Muslims keep their heads lowered, and depending on the prayer and the time of day it occurs; they may prostrate themselves numerous times.

According to Abdullah Jaber, the executive director of the Florida chapter of the Council on American-Islamic Relations, incidents such as this are why it is necessary for school staff to have religious knowledge.

The report also revealed that the Institute for Social Policy and Understanding (ISPU) found that 64% of Muslim parents indicated that their children had experienced bullying at school because of their religion, with 42% reporting that the bullying had come from a teacher or school official.