Slim Thug was surprised when his long-time friend Rapper Paul Wall ordered Big Slim Meal at Checkers’ drive-thru where he works on Dec. 6. The meeting captures a picture of two friends showing some love for each other.

This week, Paul Wall stopped by Checkers in Houston to support his good friend Slim Thug and to try his exclusive new custom meal with the fast-food chain. After surprising his good friend, Wall posted a captioned photo of Big Slim Meal on his Instagram account.

After fans spotted Houston rapper Slim Thug working the drive-thru line at a Houston-based Checkers earlier this year, a viral video of him taking orders on his first day as drive-thru manager went viral, a source posted. 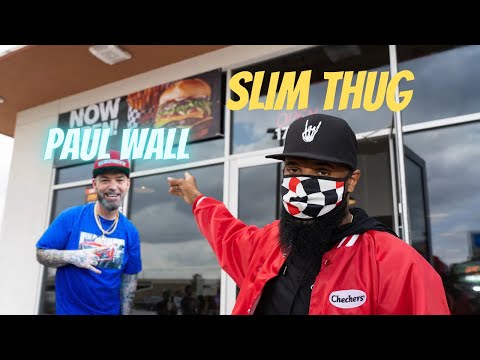 Slim Thug is grateful to Checkers for providing him with a real job for the first time, and he says he is working hard for it.

According to Slim Thug, the Checkers approached him to get more in the Texas market; they teamed up and have been doing community service for three years now. He stated that he enjoys Checkers’ products, particularly The Big Buford.

Slim Thug was promoted to manager, and he celebrated by handling the headset at the Northside drive-thru and offering a discounted menu, tasting new items such as the delicious chicken tenders, and even giving away a few free meals to lucky customers.

Slim Thug is the latest celebrity to score a Checkers meal deal. Slim Thug isn’t the only one who’s put money into fast-food restaurants. Rick Ross is the owner of a chain of Checker’s and Rally’s restaurants in Miami and 28 Wingstop locations. Chris Brown is said to own up to 14 Burger King locations.

According to a recent report, Slim Thug said, “I’m so grateful to Checkers for giving me the chance to work with them. I put a lot of effort into creating “The Big Slim,” which is my favorite menu item, as this is my first real job.