During a routine car check on December 2nd, 2022, in Corpus Christi, the United States Border Control Agents and members of the Nueces County Criminal Interdiction Unit were able to seize a record-breaking quantity of liquid fentanyl.

Agents were able to locate an astounding three gallons of liquid fentanyl. In order to put that number into perspective, Chief Patrol Agent Gloria Chavez stated that a total of 25 pounds (three gallons) of fentanyl with an estimated market value of $1.8 million was found in a compartment within the gas tank.

This fatal quantity is sufficient to wipe out a population of 5.665 million people, which is approximately two and a half times the size of Houston, Texas, B93 reported.

Despite the fact that this fentanyl was very probably going to be combined with other illegal substances in order to make them cheaper to produce and more effective, try to imagine what may have happened if it had been intended for a terrorist act. 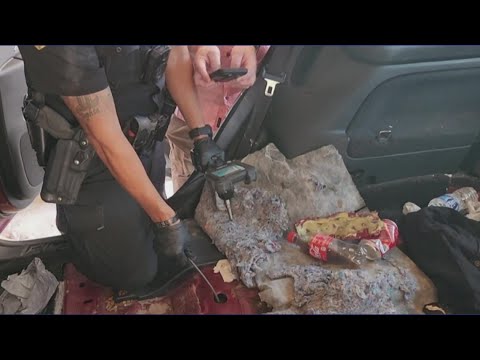 The report also stated that the majority of drug overdose deaths are caused by synthetic opioids, nearly invariably fentanyl. Users of these drugs do not anticipate finding fentanyl in their cocaine, meth, heroin, or counterfeit pills, among other substances.

Officials at the Ysleta border crossing caught about $170,000 worth of fentanyl and heroin. On Dec. 5, a Mexican male, aged 46, was stopped as he entered the country through the car lanes.

According to CBP, as part of the basic inspection process, the CBP officer submitted the vehicle for further inspection using a CBP canine and a non-intrusive x-ray scan.

CBP officers performed a thorough search of the car and discovered numerous bundles containing 14.3 pounds of fentanyl and 4.9 pounds of black tar heroin.

CBP officers were able to seize the illegal substances as well as the car, and the driver was handed over to Homeland Security Investigations agents so that he could be prosecuted for his involvement in the failed attempt to smuggle the drugs.