Josh Allen; the Shining Quarterback and only Hope of Buffalo Bills: 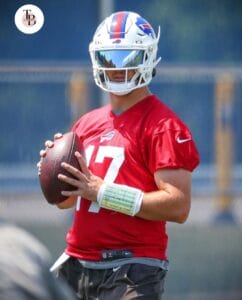 Josh Allen (Joshua Patrick Allen) was born on 21 May 1996 in Firebaugh, California. Josh is an American Football Champion and plays as a Quarterback for the Buffalo Bills of the National Football League. Josh played college football at Wyoming. Josh was selected seventh overall in the 2018 NFL Draft (Drafts are scheduled to select the players for playing in the current NFL season). Josh was lucky enough to get that opportunity at such a low age. Josh is the shining quarterback who has helped Buffalo Bills to achieve such heights that it was not able to achieve in past seasons.

Playing in the 2018 and 2019 seasons, the year 2020 was his best season play. Josh led the Bills to their first division title and playoff victory since 1995 en route to an AFC Championship Game appearance. Josh led the Bills to a consecutive division title the following year; the first time for the Bills since 1991. Josh was the first NFL quarterback to have a touchdown-scoring drive on every offensive possession of a game. He is the star of the Buffalo Bills and always believe in him. As Josh Allen says, “If you didn’t want to believe in me, that’s OK, I’ll make a believer OUT OF YOU.”

He was doing great in his game until he got injured this Sunday i.e. 6 November 2022.

What Happened to Josh Allen? What Kind of Injury has he been Suffering? 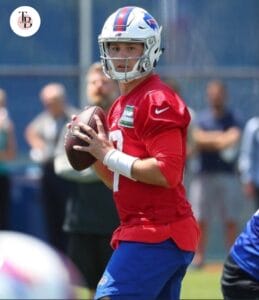 A match between the Buffalo Bills and the New York Jets was the match that shook the Bills and put them in a situation of fear. Josh suffered the elbow injury on the final drive of the Bills’ 20-17 loss to the New York Jets. It was Josh’s last drive of the second half when the New York Jets defensive player Bryce Huff hit him on the forearm during his throw. On Josh’s next play, he tried to avoid the hurting hit and shook his arm after attempting a pass. This moment of the hit caused Josh some pain and he was sent immediately for evaluation. He is being evaluated for the Ulnar Collateral Ligament injury of the elbow.

Josh’s head coach McDermott says that his injury is still under evaluation and they can’t tell the exact damage. For his loss, Josh blames himself, he said that it wouldn’t happen if the quarterback(himself) didn’t play like shit. He stated, “It’s tough to win in this league when you’re playing a good team and your quarterback plays like s—. I made some bad decisions tonight, and it cost our team. [There’s] a lot to learn from, a lot to grow from. But that’s not the standard we hold ourselves to. That’s not the ball that we play. I just got to execute better. That’s on me.”

His Fellow Players Love Josh a lot, Some of their statements for Josh: 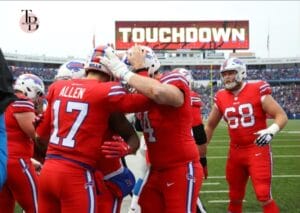 One of his fellow players offensive tackler Dion Dawkins would not let Josh take all the blame on him and said, “I would do anything for Josh. I would kill for Josh. I would give my last finger to fricking Josh. Whatever it has to be. And a quarterback like that, that’s going to put every loss on his back when he doesn’t have to. … You know, Josh is the best quarterback in the league, and he still comes out there and says what he says. He loves us and we love him.”

Everyone hoping for his speedy recovery as there is a match on coming Sunday, on which there is no update as Josh would play or not!

Read Also: Who Was Hurricane G? As The Alleged Passing Of A Hit Squad Rapper Occurs