Coach Steve Nash was fired from the star-studded Nets because of their dismal record. However, Kyrie Irving’s antisemitic social media remark still presents a bigger issue. The Nets’ dismal and turbulent start led to the firing of coach Steve Nash on Tuesday.

In his attempt to claim that Kyrie Irving’s “sorry, not sorry” stance regarding the antisemitic and conspiratorial posts he made on social media had nothing to do with the team’s choice to part ways with Coach Steve Nash, Nets General Manager Sean Marks attempted to claim that the team’s decision to fire Nash was unrelated to Irving’s sorry-not-sorry stance.

He said that no players were involved, and he begged the media to avoid drawing any connections between the coaching change and Irving’s posts.

Despite the buzz around the Nets going into the season as a potential title challenger thanks to the duo of Irving and Kevin Durant, it’s difficult to divorce Irving from the mess the team has become.

The Nets and the league are being overshadowed by Irving’s offensive posts, despite the fact that they are no longer available. At a home game against the Indiana Pacers on Monday, several courtside spectators were sporting T-shirts that said “Fight Antisemitism,” and Marks claimed that the team has been consulting with the Anti-Defamation League. If Irving took part in those conversations, he remained mum about them.

He should be, and the NBA, which has been struggling through crises this season, ought to be embarrassed that one of its franchises needs to engage in such a debate.

This episode demonstrates the flip side of the athlete empowerment he has promoted. Irving must take into account the influence of his words and his part in exposing millions of people to potentially harmful ideas. 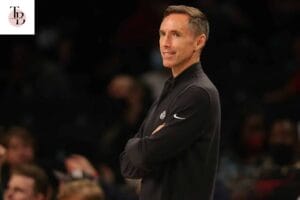 Basketball superstar with a loud voice, Irving is the Nets’ point guard. He is sponsored by Nike, which also makes his signature shoe. He serves as the N.B.A. players’ union’s vice president. He not only frequently appears on nationally broadcast sporting events, but he also has 22 million followers on Twitter and Instagram.

Irving Have No Sense Of Regret

He has already used his platform to advocate for justice as one of the several well-known Black athletes who spoke out against it in the turbulence that followed the murders of Ahmaud Arbery and George Floyd in 2020.

A link to a movie that is a case study in antisemitic tropes and the revolting myths that have followed and afflicted Jews for decades was recently shared by Irving to his substantial social media following. By titling the film, he won’t lend it any more authority or respectability. But let’s be clear: Any story that implies Jews were in charge of the slave trade and worshipped the devil needs to be strongly refuted.

Has Irving admitted regret or harboured any doubts about any of his posts? Not at all. Instead, he defended himself even more vehemently, adhering to the pattern that has come to characterise public cowardice, and painting himself as the victim of journalists and everyone else who dared to inquire about his support for hatred. After the game on Saturday, he asked, “Why are you degrading me?” while denying any wrongdoing on his part.

Read Also: Who Is xQc? What Is His Relationship Status?