On Tuesday, it was the last hour of extended store hours at the Walmart Supercenter in the commercial heart of Chesapeake, Virginia’s second-largest city. Shoppers rushed to make last-minute Thanksgiving purchases. Then shots were fired.

Shortly after 10 p.m., an employee, said to be a manager, entered a break room at the back of the store where employees were gathering for the start of the overnight shift and “just started spraying,” according to an eyewitness. Within minutes, the gunman shot his victims with a pistol before turning the weapon on himself. 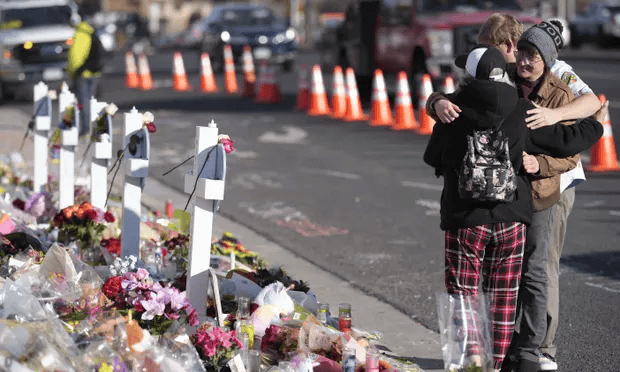 Donya Prioleau, a store employee, captured the horror of the moment on Facebook. She expressed not only her own trauma at witnessing three friends killed in front of her by a silent gunman, but also a broader sense of despair at yet another mass shooting two days before a holiday meant for reflection and celebration.

She wrote: “Somebody’s baby, mom, brother, sister, aunt, uncle, grandparents … whoever did not make it home tonight! Thanksgiving is a holiday we celebrate with friends and family … there are those who cannot. I cannot unsee what happened in that break room.”

Not only will the family and friends of the deceased and wounded be unable to celebrate on Thursday. Three days before the Walmart massacre, a guy armed with a long rifle entered a Colorado Springs LGBTQ+ nightclub and began fire.

As a consequence, the families of the five persons slain and the 25 people wounded have nothing to be thankful for. It doesn’t stop there.

According to the Gun Violence Archive, seven mass shootings have occurred in the United States in the last seven days. In addition to the bloodshed in Chesapeake and Colorado Springs, four people were killed at a marijuana farm in Oklahoma on Sunday; a mother and her three children were shot dead in Richmond, Virginia, on Friday; and mass shootings involving four or more people occurred in Illinois, Mississippi, and Texas.

Overall, 22 people were murdered and 44 were wounded throughout Thanksgiving week, all at the barrel of a gun.

According to the database, there have been 606 mass shootings in the United States this year. That means 2022 is shaping up to be one of the bloodiest years in recent memory, on pace with or topping the 610 such instances reported in 2020 and 690 in 2017.

The terrible confluence of so much tragedy amid a week of national celebration may prompt universal soul-searching. However, the public reaction has fallen swiftly and predictably into patterns that analysts of America’s gun dilemma are all too acquainted with.

In Virginia, Republican Gov. Glenn Youngkin said of the second mass shooting of the week, “Our hearts ache with the folks of Chesapeake this morning… In our community, heinous acts of brutality have no place.”

Shannon Watts, one of the most observant gun control campaigners, observed that the governor’s speech omitted two powerful words: “gunman” and “shooting.” Watts was more frank in her view of a tragic week.

“It’s the fucking guns,” she tweeted. “If more guns and fewer gun laws made us safer, America would be the safest nation in the world. But 400,000,000 guns in the hands of civilians coupled with weak gun laws have given us a 25 times higher gun homicide rate than any peer nation.”

The suspect in the Club Q shooting in Colorado has been released from the hospital and is now being detained at the local county jail. Anderson Lee Aldrich, 22, was due in court for the first time on Wednesday, facing potential murder and hate crime accusations.

The suspect’s identity was changed from Nicholas Franklin Brink six years ago. The suspect’s defence counsel said in court files that they are nonbinary and utilise they/them pronouns.

A judge has overturned New York’s limitations on weapons on private property.

Despite an event 18 months earlier in which their mother was threatened with a homemade bomb, the suspect seems to have had lethal weapons in his hands prior to the shooting. There is no evidence that officials used a state red flag statute, which authorises authorities to seize guns from someone deemed a risk to self or others.

Colorado Springs is known as one of the most conservative cities in the United States. It is home to a number of renowned evangelical Christian and anti-abortion organisations.

El Paso County, which includes the city, proclaimed itself a “second amendment sanctuary” in 2019. The legislation, which referred to the constitutional right to carry weapons, was enacted in response to legislative efforts to tighten gun laws in the aftermath of multiple heinous mass shootings.