Who is Eric Stonestreet? 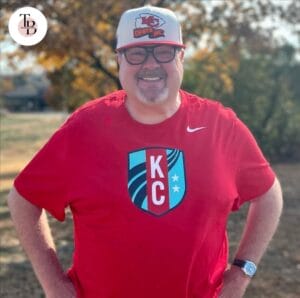 Eric Stonestreet’s full name is Eric Allen Stonestreet. Eric is a famous American actor and Comedian. He was born on 9 September 1971 in Kansas City, Kansas, United States of America, aged 51. His most famous portrayal was Cameron Tucker in the American Broadcasting Company (ABC) mockumentary situational comedy ‘Modern Family. Eric has been nominated three times for Outstanding Supporting Actor in a Comedy Series and has won 2 times for his wonderful work in Modern Family.

He did his graduation from Piper High School and Kansas State University, graduating with a degree in Sociology in the year 1996. During his University years, Eric performed in various plays such as ‘Prelude to a kiss, ‘All My Sons, and Twelfth Night. Eric wanted to improve his acting skills which he studied at Improv Olympic and The Second City Training Center in Chicago. He late moved to Los Angeles and began his acting career.

This is very interesting to note that during his childhood, Eric dreamt of becoming a clown and entertaining everyone. In his childhood innocence, he made a clown character and named it Fizbo. He then started performing as a clown in 6-7 years old birthday parties, when he was 11 years old. Eric once memorized back in 2012, “I don’t know where the name Fizbo came from. I do know one day that’s what my dad was calling me and that’s the name that I printed on my business cards.” Fizbo became Eric’s identity and eventually, his character in Modern Family was named Fizbo.

Is the Comedian Actor dating a Nurse? 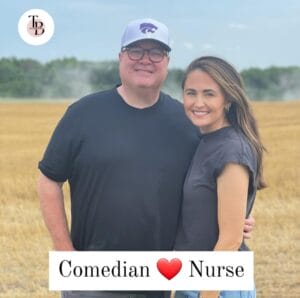 Eric Stonestreet; a comedian has been dating Lindsay Schweitzer; a pediatric Nurse. The couple is being together since June 2016. They met during the Big Slick Charity event weekend in Kansas City. They have always indulged themselves in various charity works. Lindsay has always supported Eric in his career and has made many Red Carpet appearances with him.

The couple is engaged now as Eric shared the news with his fans on his Instagram. He let everyone confirm that Eric and her love are still together and are committed to each other. The Modern Family actor shared some pictured with Lindsay pointing towards her ring and captioned it, “She said, ‘She’d have her people call my people.” 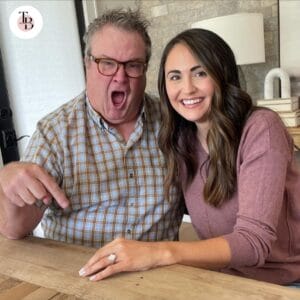 In 2017 at The Ellen DeGeneres, Eric was teased by the host, as the host said jokingly, “Your girlfriend is lovely — I met her backstage. She’s a nurse. That’s a good thing for you because you’re a hypochondriac.” To this Eric then replied mockingly, “I’m a big baby, too. She calms me — she calms my nerves. I’m a very high-strung person. “You can tell, right? What are you looking at, ma’am?!” he jokingly exclaimed at a woman in the audience before adding: “My nurse girlfriend will take care of you.”

Reactions to Eric’s and Lindsay’s Relationship:

Since Eric’s role in the Modern Family was of a gay and he married a man in the series, his sexuality was questioned in reality. At an event in 2016, Lorraine Kelly spoke to Eric about his sexuality during her ITV morning show. She started and said, “I bet everyone asks you this,” before she followed up with: “I can’t believe you’re not gay!” Eric took it as a joke and has lightheartedly described himself as “openly straight”. For him, it was just a role and he is proud of it. It was just a “Gay-for-Pay”.

The moment Eric flourished his Instagram with the cutest pictures on Instagram confirming their engagement, people got overwhelmed and commented on their happiness:

Gwyneth Paltrow commented, “YAY!!! We are so happy for you.”

Read Also: Is Laura Ingraham Married? Who Is Her Husband?