A former heavyweight boxer, Goran Gogic was born on August 4, 1979, in Pljevlja, Montenegro, in the Balkans, a region of southeastern Europe. His full name is Goran KristijanGogic.

Goran received a graduate degree and was educated in his native Montenegro where he was raised. At a very young age, his enthusiasm in boxing peaked. Fritz Sdunek, a former junior fighter and trainer for professional boxing in Germany, was Goran’s coach.

The US Department of Justice announced on Monday that former heavyweight boxer Goran Gogic had been accused with trafficking more than $1 billion worth of cocaine through US ports.

According to a news release from the DOJ, the 43-year-old Montenegrin was detained on Sunday night as he attempted to catch an aircraft out of Miami.

He Is Accused For Three Charges 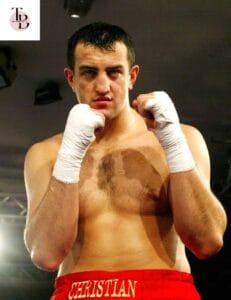 According to court documents, Gogic has been charged with three charges of breaking the Maritime Drug Law Enforcement Act as well as one count of conspiring to break the law. According to the DOJ, he would be subject to a mandatory minimum sentence of 10 years in prison and a maximum term of life behind bars if found guilty.

The amounts of cocaine that Gogic and his suspected accomplices allegedly tried to transport were “staggering,” according to Breon Peace, US attorney for the Eastern District of New York, who also emphasised that it was more than 20 tonnes.

According to the DOJ and court documents, between May 2018 and July 2019, Gogic reportedly “conspired with others to transfer significant quantities of cocaine” obtained from Colombia to Europe on commercial cargo ships loaded in the US.

According to the DOJ, three shipments of cocaine were recovered by US law enforcement officials. On June 19, 2019, the Port of Philadelphia had the greatest of the three seizures when roughly 20 tonnes of cocaine were discovered concealed on board the MSC Gayane.

What Does The Law Says

According to the DOJ, it was “one of the greatest recoveries of cocaine in American history” and was valued over $1 billion.

Gogic was detained after appearing in federal court in Miami on Monday, according to Gogic’s attorney Lawrence Hashish, who also told CNN that his client was surprised by the charges and that he had travelled to the United States for a boxing convention in Puerto Rico. Gogic maintains his innocence.

Gogic’s detention hearing in Miami federal court is scheduled for November 7, according to Hashish, although the date may change because Gogic is presently quarantined there.

Read Also: Bob Geldof; An Irish Singer’s Life and Wife! His Net Worth 2022 and Marital Status