With his anti-Semitic remark, Kyrie Irving forced the Brooklyn Nets into a situation they didn’t want to be in at all. By failing to categorically state he is against anti-Semitism or reject the film’s terrible elements, the erratic point guard furthered his harm.

Kyrie Irving is currently viewed by the Brooklyn Nets as being unfit to be linked with them, according to a statement from the team. Kyrie will be placed on an indefinite leave of absence without pay until he completes a number of objective corrective actions, it has been agreed.

The Anti-Defamation League, the Nets, and Irving just made another statement about collaborating “to combat hate and bigotry.” To achieve that particular objective, the team and the seven-time All-Star each promised to donate $500,000.

The Brooklyn Nets are fed up after Kyrie Irving again refused to answer “No” when asked if he holds anti-Semitic views. The current suspension for Irving is “at least five games.” Irving might never put on a Nets uniform again if he is unable to accept “objective remedial measures” to address his behaviour.

The ADL has decided not to accept Irving’s $500,000 donation because of the way he consistently dodges questions about his anti-Semitic views.

Adam Silver, the commissioner of the NBA, has also stated that he will meet with Kyrie Irving. Watch out for whether that will proceed after the Nets already announced his ban.

With His Most Recent Incident, Kyrie Irving Is Now Suffering Financial Losses 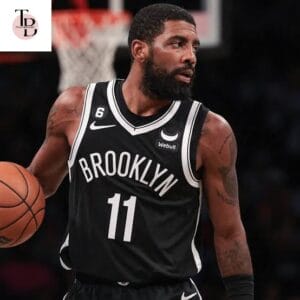 For the point guard of the Brooklyn Nets, a new season comes another mind-blowing scandal.

Before choosing to sign his $36 million contract, Kyrie Irving had the option to leave town and sign as a free agent. He reportedly pondered accepting a $6 million mid-level exception in order to join with the Los Angeles Lakers. Irving did not want to lose out on $30 million.

He could lose even more money than what he’s scheduled to lose because the Brooklyn Nets have suspended him without pay. Despite sitting out his final season with the Philadelphia 76ers, Ben Simmons, Irving’s current teammate, was still able to reclaim part of his paychecks.

Following his social media statements endorsing an anti-Semitic movie, the Nets have decided to punish Kyrie Irving for at least five games without pay.

“He apologise that he trust in LeBron more than him and Darvin Ham,” an NBA commentator said when asked why he wanted LeBron James to make the crucial shot against the Pelicans.

Read Also: Savonne Morrison, The Second Suspect In The Murder Of Clearwater Man Jeffrey Chapman, Has Been Detained