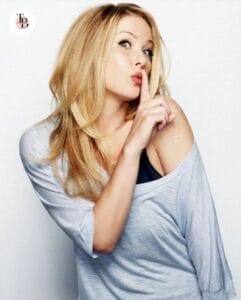 Christina Applegate is an American actress who was into acting since her childhood. She was born on November 25, 1971. She earned recognition as a child actor through her role as Kelly Bundy in the Fox Sitcom Married…with children. She established her acting her in her adulthood by working in various television shows and films. She won Prime Time Emmy Award and has been nominated seven times for the same. Applegate was also nominated for Golden Globe Award four times.

Applegate’s various television shows are; Married… with children, Jesse, Samantha Who?, Up All Night, and Dead to Me. Her various films are; Don’t Tell Mom the Babysitter’s Dead, The Big Hit, The Sweetest Thing, Grand Theft Persons, Vacation, Bad Moms, Crash Pads, and many more.

During her working days of the shooting of Dead to Me, Applegate notices various changes in her body; though she neglected them. Now, she is open about the physical changes in her body that led to her being diagnosed with MS (Multiple Sclerosis; is a disease that disconnects the brain and spinal cord coordination. It causes problems with the connection of the brain with the rest of the body.) Applegate’s neglection to this dangerous disease, she is now suffering from it at the extreme.

Talking about Applegate’s health history, she has even suffered from breast cancer. Though it was not a life taking cancer, she was treated at its early stage only.

What and When it happened to Applegate? 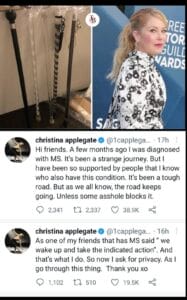 In an interview with The New York Times, Applegate admitted that she noticed some changes in her body during her shoot of the show Dead to Me. Applegate memorized the time few years back of how she fall during a dance sequel for the show. She also noticed her declining performance in the tennis game but neglected the fact and thought she need more to work hard. That is the biggest mistake we did for our health.

“I wish I had paid attention, But who was I to know” said Applegate.

From the mid of the year 2021, Applegate had started experiencing numbness in her body. some symptoms of neurological condition; which interrupt the connection between brain and body, causes utter pain in the body, mood swings, tingling, paralysis. Her negligence causes her this pain, for what she is upset about.

During the summer of 2021 Applegate was shooting for the last season of ‘Dead to Me’ and then when she suffered this diagnoses at extreme. For her treatment, the shoot for the show was stopped for five months. Everyone hoped for a quick recovery for Applegate and she too needed that break.

Applegate said, “And there is no better. But it was good for me. I needed to process my loss of my life, my loss of that part of me. So I needed that time.” She was never ready to accept the fact of her loss to life and said, “Acceptance? No. I’m never going to accept this. I’m pissed.”

Christina Applegate thanked her co star and her close friend Linda Cardellini for supporting her through the shoot of the last season of ‘Dead to Me’. Applegate praises her friend Linda, “She was my champion, my warrior, my voice,”, adding, “It was like having a mama bear.”

Applegate recently tweeted with a picture of her standing with sticks, calling it her new normal; “I have a very important ceremony coming up. This will be my first time out since diagnosed with MS. Walking sticks are now part of my new normal.”