DELPH, Indiana — In a case that has baffled the neighbourhood and online crime solvers for years, police on Monday announced the arrest of a suspect in the 2017 murders of two teenage girls.

In connection with the murders of Liberty “Libby” German, 14, and Abigail “Abby” Williams, 13, in February 2017, Richard M. Allen, 50, of Delphi, was detained on two charges of murder, Indiana State Police Superintendent Doug Carter announced on Monday.

The arrest is “a key step in leading to a conclusion in this long-term and complicated investigation,” Carter said, adding that “today is not a day to celebrate.”

Suspect in Delphi’s murder Richard Allen: An Indiana village seeks clarification on a man who “mixed in.”

The person who worked at CVS was Richard Allen, 50. He played pool at JC’s Bar and Grill, which is now defunct. He was decent but not particularly gregarious.

That was all there was to the small town of Delphi, Indiana, up until this past weekend.

In the murders of Libby German and Abby Williams, a Delphi man is accused of murder.

While drinking a beer in the Office Tavern off Delphi’s Main Street, 74-year-old Tom Brower remembered, “It startled the crap out of me.” He noticed the man’s face, who he characterised as helpful and polite, appearing as a mug image on the news. No warning signs, said Brower.

A man from Indiana is reportedly detained in connection with the 2017 murders of two girls in Delphi.

According to FOX 59, Allen works at a nearby CVS. Last week, authorities investigated his property and paid particular attention to a fire pit.

Carroll County Prosecutor Nicholas McLeland noted at the news conference that he entered a plea of not guilty at his initial hearing and was not given bond.

We got him, said German’s sister Kelsi German in a tweet on Monday. The arrest affidavit and charging paperwork, which are often made public in criminal cases, were sealed by the court. Officials provided little fresh details.

The probe has not been concluded, according to McLeland. Right now, we are not making any assumptions.

According to earlier reports from the police, the girls were discovered drenched in blood, and the murderer had removed a souvenir from the site. Police have not, however, revealed how the girls were killed or the evidence they have gathered in the investigation. 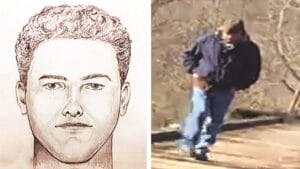 Days after the murders, authorities unveiled two blurry pictures of a guy crossing an abandoned railroad bridge that had been captured on German’s phone just before the girls’ bodies were discovered in a forested area along the Delphi Historic Trail.

However, the case stumped detectives for more than five years with lead after lead going cold. The phone also had an audio clip of a guy, thought to be the murderer, telling the duo to go “down the hill.”

The bodies of the girls were discovered on Ron Logan’s farm following the deaths, when officials carried out a search warrant there. Investigators found that Logan had made up a story about where he was on the day of the double homicide. According to FOX 59, he passed away in January and was never formally designated a suspect.

Days after the murders, police unveiled two pixelated images of a suspect crossing across the girls’ abandoned train bridge. Additionally, there was an audio clip of a man who is thought to be the culprit saying, “Down the hill.”

The FBI obtained a search order in March 2017 and executed it at the residence of Ron Logan, the owner of the property where the girls were discovered. Logan made up a fictitious alibi for his whereabouts on the day of the murder, and the search warrant claims that his cellphone rang close to where the girls’ bodies were discovered. He was never charged, according to WTTV, and passed away in January from complications brought on by COVID.

Read Also: Who Is Pablo Mari? What Is His Net Worth? Find Out About Recent Attack On Him