It’s not an easy task to wrap up a series as complex as Ozark since there are so many things that may go wrong. According to findings, the most difficult task for most showrunners may be to tie up all the loose ends from the first seasons in a satisfactory manner. For a series like this, there are a lot of characters, as well as their actions, that need to be resolved. It’s the swang song that the Byrde family has been waiting for. Is it true that the family was attempting to get out of one bad circumstance when they ended themselves in another 50? Yes, Marty (Jason Bateman) and Wendy (Laura Linney) have gone through a four-season journey where they have done and said unimaginable things. 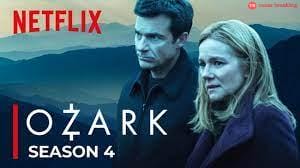 The fourth season’s final episodes begin with Ruth (Julia Garner) pursuing vengeance for the death of her cousin Wyatt (Charlie Tahan) and his wife Darlene (Lisa Emery). She’s determined to find Wyatt’s killer, but she’s at a loss about where to start. Meanwhile, Javi (Alfonso Herrera), the man responsible for Wyatt and Darlene’s killings, is negotiating with Mary, Wendy, and Clare Shaw (Katrina Lenk). Ruth, who is bloodthirsty, is persuaded by Marty and Wendy to refrain from taking any drastic measures, notably attempting to kill Javi. Meanwhile, Marty gets to go up against the cartel’s top leadership in Mexico, as he tries to figure out who ordered Navarro’s assassination (Felix Solis). However, a larger portion of the plot concentrates on Navarro’s sister, Camila (Veronica Falcón), who plays a pivotal role in the conclusion.

Ozark’s fourth season contains a lot of subplots, and the intertwined narratives can be tedious to follow at times. The series’ final seven episodes centre on the Byrde family’s last attempts to break out from their tangled relationships with drug cartel owners and into something that will allow them to reintegrate into society with a better reputation. Wendy (Linney) sink to new lows in her quest for their endgame, passing out fliers for her “missing” brother, whom she killed herself in the third season. Mel Sattem (Adam Rothenberg), a character I gave up on a long time ago who makes a major cameo in the finale, is among the Byrdes and Ruth’s plans. With the fates of the Byrdes and Sattem interwoven until the very end, the show’s last minutes are intense.

The concluding episodes of the previous season are full of surprises, such as flashbacks, the reappearance of characters from previous seasons, and so on, which work well in terms of providing each character a suitable finish. However, the nature of the show’s main characters’ conclusion, particularly the Byrde family and Ruth, may not sit well with many fans. Although, in my opinion, given the character development of any of them, whether Marty, Wendy, or Ruth, it is a fair conclusion. We’ve learned enough about these characters over the course of four seasons to know where they stand when it comes to determining the correct or wrong judgments.

Jason Bateman suggested in an interview before the publication of the second part of the final season that the finale would have an emotional element, and it’s probably one of the greatest distinctions you’ll notice for the series. In the last episodes, we see Ruth’s struggle to assemble her feelings, Wendy’s moment of perfect self-awareness, and a long-overdue emotional conversation with her children. A beautiful reference to the first season occurs at one point, when the Byrde family enjoys a car journey together, practically delighted that they are about to crawl out of all the murky stuff.

Laura Linney’s performance has stayed fairly impressive throughout the course of the four seasons. In the closing episodes, she knocks it out of the park once more, bringing Wendy a much-needed emotional awakening.

In a moment with Ruth (Garner), she says, “It’s my fault. All of it”, Linney eloquently describes Wendy’s breaking point. Jason Bateman also gives a strong performance, notably in the episode where he assumes control as the kingpin of Mexico. Overall, the last season belongs to Julia Garner, who exposes several levels of Ruth with a genius that is astonishing throughout the fourteen episodes. Her emotional vulnerability is immaculate in her portrayal.

Jason Bateman directs the season’s massive conclusion, which is gripping from start to finish. The ending of the series offers ample room for a return years later. A senseless automobile accident is one of the depressing aspects of the climax, but there is also a lot of foreshadowing when it comes to Ruth’s fate, which becomes even more disappointing when witnessing the final event.

One thing is certain: when it comes to the ending, Ozark takes the easy way out. It doesn’t deliver a stunning conclusion; instead, it delivers something brutally honest, as if to say, “This is how the world works.” In this gloomy environment, it’s possible that taking responsibility for our acts is a dystopian concept.