The largest city in the Texas Panhandle might well be best known presently for its position on Route 66, and for those who halt and stay awhile, there are plenty of state parks as well as a handful of national parks to visit near Amarillo. 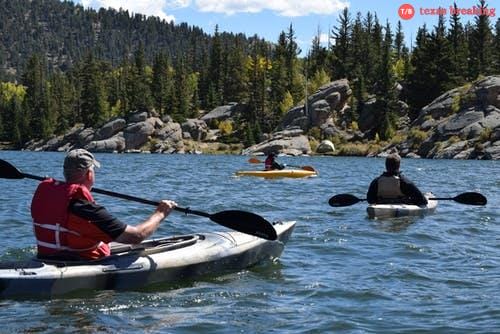 Are you looking for fun national and state parks around Amarillo? Here’s where you should check!

For this list, we’ve focused on parks within a few hours of Amarillo to make sure that you can visit on a day trip from the city.

Caprock Canyons State Park has always been a favorite among Texas hikers, with approximately 90 miles of trails and plenty of stunning, rocky terrain. In this park, you’ll also discover the official Texas Bison Herd–and you might be stuck in a bison traffic jam if they decide to cross the road in front of you.

Palo Duro Canyon dubbed the “Grand Canyon of Texas,” is one of the most interesting Texas state parks–and it’s right next door to Amarillo! There are numerous climbs and vistas to choose from, but make the hike to the lighthouse formation a priority! The trail is hot and can be strenuous at times, particularly during the last ascent, but the payoff is well worth it.

While Big Bend National Park and Guadalupe Mountains National Park are quite a distance from Amarillo, there are a number of additional federally controlled sites in the Texas Panhandle and Plains that are worth visiting!

Magnificent lakes are certainly not the first thing that springs to mind when looking for state and national parks near Amarillo, but that’s precisely what you’ll discover at Lake Meredith National Recreation Area!

There are various hiking paths in the park, but you’ll also discover canoeing, kayaking, swimming, boating, and other water activities, assuring that no matter what your favorite water activity is, you’ll enjoy it at Lake Meredith.

The flint found in Alibates Flint Quarries National Monument has been sought for by mankind for over 13,000 years and was previously crucial to the survival of many people. It is one of Amarillo’s most unusual attractions, as well as an excellent site to study the region’s history. Join a Ranger-led hike to learn about the area’s history or simply to take in the scenery!