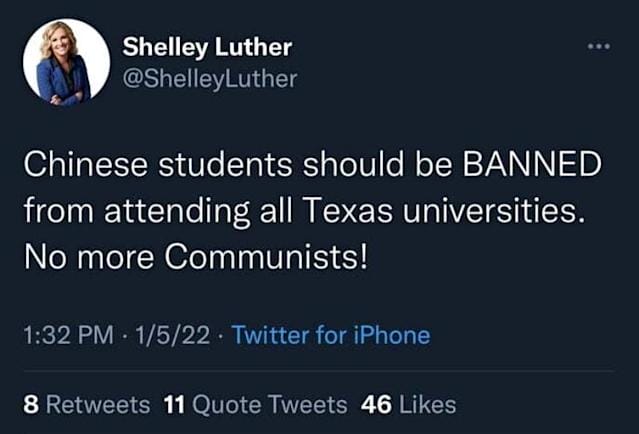 After proposing a ban on Chinese students attending Texas universities, a Republican candidate for the Texas House of Representatives has provoked controversy. 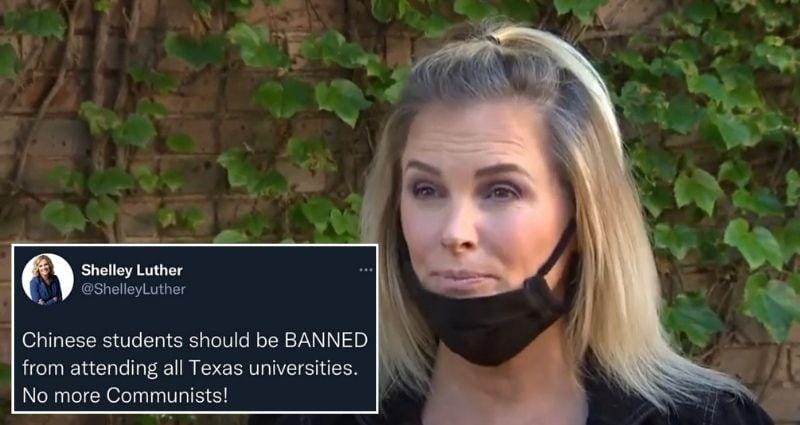 Shelley Luther originally said in a since-revised tweet, “Chinese students should be BANNED from attending all Texas universities. No more communists!”

Luther went on to explain that taxpayers “should not be subsidizing the next generation of CCP [Chinese Communist Party] leaders” and that CCP members “should not have access to our schools” in later tweets.

According to the Texas Tribune, Luther, a hairdresser, made news in 2020 when she refused to close her Dallas salon despite emergency orders. She managed to spend two nights in jail as a result of her behavior.

Luther’s tweet was declared “racist” by Rep. Gene Wu, a Chinese American Democrat from Houston, who sought a public apology.

“Luther’s statements are ignorant, hateful, and incite violence against not only Chinese Americans, but all Asian Americans,” Wu added, citing an increase in anti-Asian incidents in the aftermath of the COVID-19 pandemic.

“To casually conflate all Chinese students in America with actual registered members of the ruling party in the People’s Republic of China is not only ignorance of an extreme nature, but it is also the type of rhetoric that drives anti-Asian hate crimes.”

Luther responded to Wu’s statement by tweeting that he was “simply for the CCP” and an “enemy of the people.”

It’s common sense: CCP members should not have access to our schools https://t.co/MbiFkbUUN8

Luther’s assertion appeared to be countered by a Texas House Republican. Rep. Jacey Jetton, an Asian-American, said on Twitter that her party “should stand against canceling Chinese students on college campuses.”

“To do otherwise is an attempt to score cheap political points by targeting Chinese people, but real leaders know there is a huge distinction between Chinese individuals and the Chinese government,” Jetton wrote.

Luther adamantly refuted the accusation of being a racist.

Luther, on the other hand, has used anti-China rhetoric before, referring to COVID-19 as the “China virus” on Sunday.

Chinese state media have already picked up on Luther’s statements. Global Times published an op-ed on Sunday claiming to be “clearly more ideological.”

“Luther’s rhetoric was made to confuse the public and further sow seeds of hatred for Chinese students and Chinese Americans among voters in Texas,” Global Times noted.