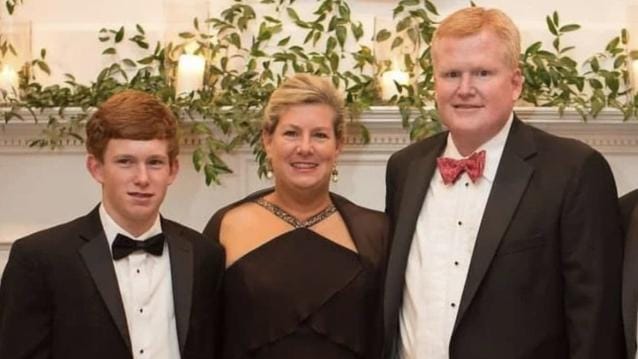 A well-known South Carolina attorney whose wife and son were murdered in June and he himself was reported to be shot in the head during the weekend, has been accused of stealing from his law firm. Alex Murdaugh said Monday he plans to resign from his law firm and start an unspecified rehabilitation treatment, reports said.

Three months ago, Murdaugh discovered the bodies of his wife, Margaret, 52, and son, Paul, 22, shot dead outside the family’s home, making headlines all over the nation. And in a surprising turn of events, Murdaugh called 911 during the weekend and reported that he was shot in the head by an unknown trucker while he was changing a flat tire on the road.

Adding to the chaos, Murdaugh released a statement Monday, stating that he was leaving the law firm that his great-grandfather established hundred years ago and that he was entering rehab. “The murders of my wife and son have caused an incredibly difficult time in my life. I have made a lot of decisions that I truly regret. I’m resigning from my law firm and entering rehab after a long battle that has been exacerbated by these murders. I am immensely sorry to everyone I’ve hurt, including my family, friends, and colleagues. I ask for prayers as I rehabilitate myself and my relationships,” he said.

Murdaugh, 53, did not include in his statement that he had been fired and forced out of the firm, Peters Murdaugh Parket Elzroth Detrick, on Friday due to allegations of theft.

In a statement released Monday evening, the firm said: “His resignation came after the discovery by PMPED that Alex misappropriated funds in violation of PMPED standards and policies.”

“A forensic accounting firm will be retained to conduct a thorough investigation. Law enforcement and the SC Bar have been notified by PMPED. This is disappointing news for all of us. Rest assured that our firm will deal with this in a straightforward manner,” it said.

Jim Griffin, Murdaugh’s attorney, confirmed to New York Times that Murdaugh left in response to the allegations made and that police were already aware about them before the shooting happened. Griffin said that his client felt “regret and sorrow” over his leaving.

There are hardly any details about the shooting that happened over the weekend.

Griffin also told reporters that Murdaugh was on his way to Charleston and stopped for a while to change a tire when a trucker he passed on the road doubled back, and opened fire.

Murdaugh was taken to a hospital in Savannah, Georgia, where he was treated for a “superficial gunshot wound to the head.” No arrests were made.

His family released a statement regarding the tragedy that he had endured. “The Murdaugh family has suffered through more than any one family could ever imagine. We expect Alex to recover and ask for your privacy while he recovers,” the statement said.

In June this year, Murdaugh found the dead bodies of his wife and son on the 1, 700-acre estate. During that time, his son, Paul, was facing charges for allegedly killing a girl in a drunken boating accident but it is unknown if the two incidents are related.

Alex and his other son, Buster, offered a $100, 000 reward after the murder of Margaret and Paul but no arrests were made.

The Murdaugh family has been a well-known family in the state. Murdaugh worked for PMPED with his brothe, Randolph IV. Their father, Randolph III, was also a partner up until his natural death in June, following the double homicide.

A Hampton County resident who wished to be unidentified told the Daily Beast on Monday that “the whole state is talking about Alex Murdaugh.”

“The family is royalty around here—and their demise these last few years is all anyone seems to be talking about,” the resident said.

The resident added that he was relieved that Murdaugh survived the shooting but added that how he got shot “seems to be missing a few details.”

“The whole investigation into his wife and son’s murder has been so top secret. Adding in this Saturday incident—someone better start talking.”