The Texas House Public Education Committee on Tuesday passed Senate Bill 15 — a measure that would provide virtual learning funding, with some limits. The legislation was passed on a 9-1 vote.

Senate Bill 15 is pushed as a measure with enough barriers to assure students succeed and to also help those who might fail. The bill would pay for virtual learning until September 2023 and allow the local school districts and charter schools the power to set up their own virtual learning programs, Texas Tribune reported.

Lawmakers have set fall 2023 as the date that will allow them to revisit the issue during their next regular sessions. 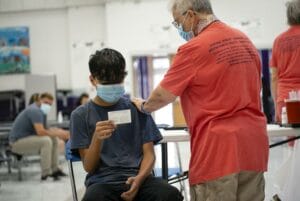 But, the bill as approved by the committee, only allowed remote learning to be offered in schools that had a C grade or higher in the recent round of state accountability testing. Less than 10% of the district’s student population is allowed to enroll online. Schools may also require students to return to in-classroom learning if they do not meet academic standards.

“Senate Bill 15 empowers our districts to be innovative and flexible to meet the needs of our students,” said Rep. Keith Bell, R-Forney.

Bob Popinski, director of policy at Raise Your Hand Texas, also said that the education policy and research group favors the virtual funding bill because they know the pandemic is still a thing and schools should be funded for a virtual option. Although they also believe that students should be in the classroom.

Popinski also said that there are a lot of provisions in the bill to help students succeed, be it virtually or in person.

On the other hand, Monty Exter, a lobbyist for the Association of Texas Professional Educators, said that they disagree with the bill because they believe that virtual learning doesn’t work for most students and the bill would just give districts the reason to expand their virtual offering.

The Texas State Teachers Association also opposed the SB15 because as per them, it would “increase virtual learning even after the pandemic and this could divert tax dollars from classrooms.” The organization called on Abbott to use his emergency powers to fund virtual learning only in a short period of time.

“We believe the classroom is the best learning environment for students, but we understand that many parents want to keep their children at home learning remotely, especially since Gov. Abbott is fighting mask requirements in school districts,” the statement said.