Navy And Marine Corps To Join Rest Of U.S Military In Mandating COVID-19 Vaccines; Counseling For Those Who May Refuse
Advertisement 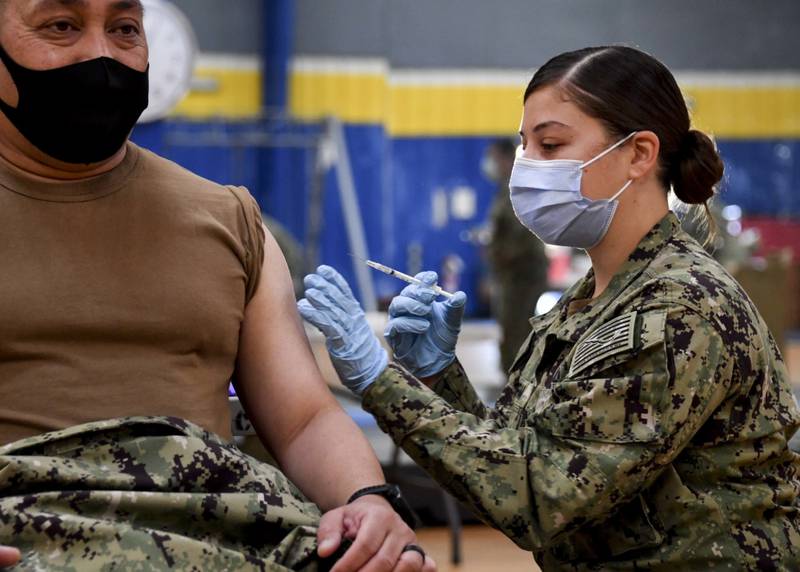 As the Navy and Marine Corps are all set to join the rest of the U.S. military in mandating COVID-19 vaccines potentially as soon as next month, the sea service’s top medical officer said Thursday that he believes there is no need to administratively discipline or court-martial sailors and marines who will refuse to get the COVID-19 vaccine.

During a Defense Writers Group event, Navy Surgeon General Rear Adm. Bruce Gillingham said: “We’ll go back to counseling. We’ll sit down with the individual, understand the source of resistance and address that.” He also added that he expects that nonjudicial punishment or legal proceedings “would be very late in the continuum,” Navy Times reported.

Gillingham also mentioned that more than 72 percent of the sailors and more than 50 percent of the marines are already vaccinated. Talking about those who are yet to get the vaccine, Gillingham said that when they realize that the implementation of mandatory vaccination is required for mission readiness, he believes that such marines and sailors will “see the value and proceed getting it”. The Navy Surgeon also said that they are not expecting significant resistance. Gillingham said the service will “be attentive and responsive to medical exemptions” involving immunocompromised individuals or those who had an allergic reaction to the first or second dose of the Pfizer or Moderna shots.

During a panel at the Sea Air Space symposium earlier this month, Gillingham stated that the COVID vaccines are a vital force-protection. “The enemy this time is a virus, and we have a biological body armor for them to take and use to protect them … this is biologic body armor. Put it on, be protected.”

On the other hand, Chief of Naval Personnel Vice Adm. John Nowell said in July that the way back to normal is vaccination. “I don’t think you’d see senior leadership pushing (vaccination) if we did not think it was safe and if we didn’t think it was imperative,” he had said.

Fleet Master Chief Wes Koshoffer agrees, given the fact that the Delta variant, a more dangerous one that spreads quickly, is targeting those who are not yet vaccinated.

In this article:Counselling for those who might Refuse,Join Rest of the U.S Military in Mandating COVID19 vaccines,Navy and Marine Corps,U.S Military