A man was mauled by two loose pitbulls in northwest Harris County on Thursday. Deputies from Harris County Precinct 4 described the scene as “pretty gruesome.”

According to reports, Life Flight landed in a church parking lot at 13222 Bammel N. Houston after responding to a call to save an elderly man who was mauled by two dogs. 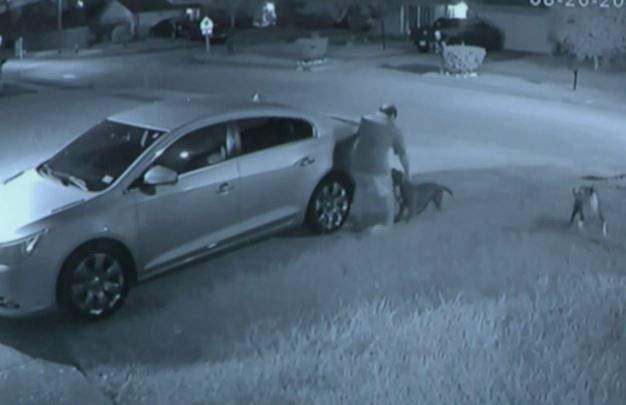 The deputies from Harris County Precinct 4 responded to the call for help after the dogs reportedly attacked the elderly man who was out for his early morning walk in the 4300 block of Queens Retreat Drive at around 6.30 a.m.

The attack happened in the front yard of Elmer Lavigne, a retired sheriff’s deputy. According to KPRC 2, Lavigne had shot one of the dogs, while an unnamed deputy shot the other one who bit the animal control officer trying to detain the canines. Both dogs are reportedly still alive.

“When I came out, the dogs turned around and went to attack us. I shot him through the shoulder and it didn’t even stop him,” Lavigne said.

One of the witnesses, Darrel Berryman said that he heard a call for help. He shared that the dogs had the victim by the face so he told his granddaughter to call 911. 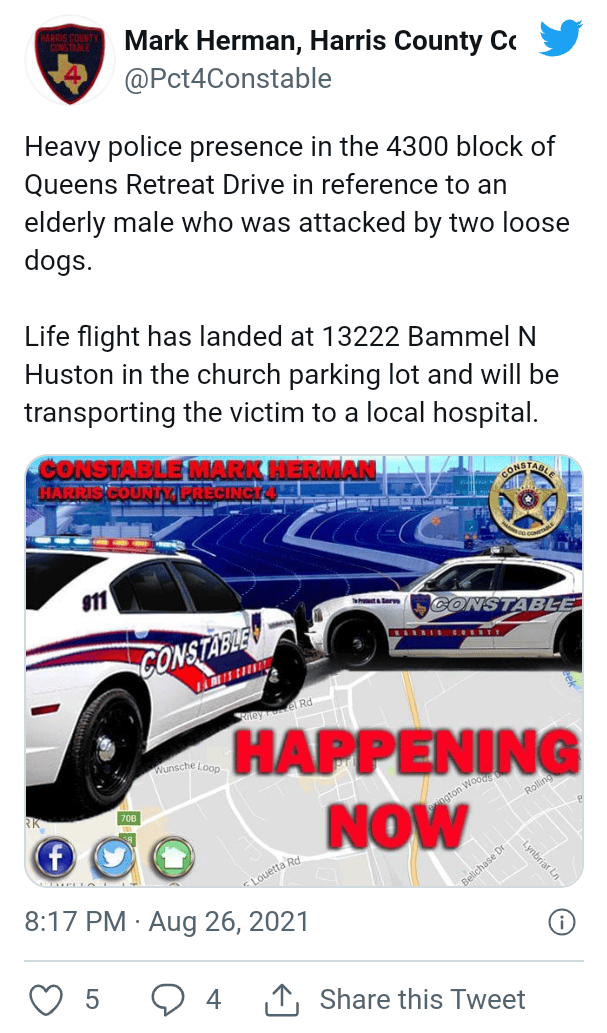 Daniel Garza, one of the deputies from Precinct 4 who responded to the call, said this attack was rare and ‘pretty gruesome.’

“He did lose quite a bit of blood. That was the main concern. I’ve been doing this a long time and this type of attack is not something you see on a normal basis.”

Though the victim remained unnamed, the deputies said that he is likely to be in his 40s or 50s. They also shared that he suffered injuries to his upper body, lower body, face and neck, and that the paramedics had to give him two units of blood on the scene.

Zach Dunlap, the Critical Care Manager for Cypress Creek EMS, said a quick-acting team responded to the call for help.

“I’ve had a lot of dog bites and maulings, but this is up there with some of the worst I’ve ever seen,” Dunlap said. He shared that the man received two units of blood on the scene before they could take him to the nearby trauma center at Memorial Hermann.

“He received two units of blood which is very unique to receive that out of the hospital. We got his blood pressure up. We were able to intubate him,” Dunlap shared. “Life flight was able to take him down to the medical center and he’s been in surgery throughout today… Had this happened in other parts of the country where he did not have blood or he did not have rapid access to a Level 1 trauma center, the outcome would have been probably worse.”

The victim has been in surgery all day Thursday, according to Dunlap.

“It’s in the trauma surgeon’s hands to do good work now. Everybody has done their job,” Dunlap said.

Neighbors also said their prayers for the elderly victim.

Berryman clarified that he had called the police three times to report the dogs as the pitbulls also broke into his yard and killed his dogs, but the deputies are saying they do not have any records of Berryman’s report.

Animal control has taken the dogs into custody while the owners were taken by the deputies for questioning, pending charges.