The ban has been issued as the governor recovers from his “brief and mild” infection, which he believes to be the reason for his COVID-positive tests. With this latest mandate, he is prohibiting local governments, state universities, and public hospitals from requiring anyone to get a COVID vaccine shot. However, he did give exceptions for nursing homes and other long-term care facilities.

The governor’s also raised as an additional agenda item to the legislative special session on Wednesday. During the session, he asked the Legislature to consider turning the mask ban mandate into law and to take action and clarify whether the state or the local entities can mandate the shots, along with the exemptions for the mandate.

In his statement which Abbott also shared via Twitter, Abbott said: “Vaccine requirements and exemptions have historically been determined by the legislature, and their involvement is particularly important to avoid a patchwork of vaccine mandates across Texas.” 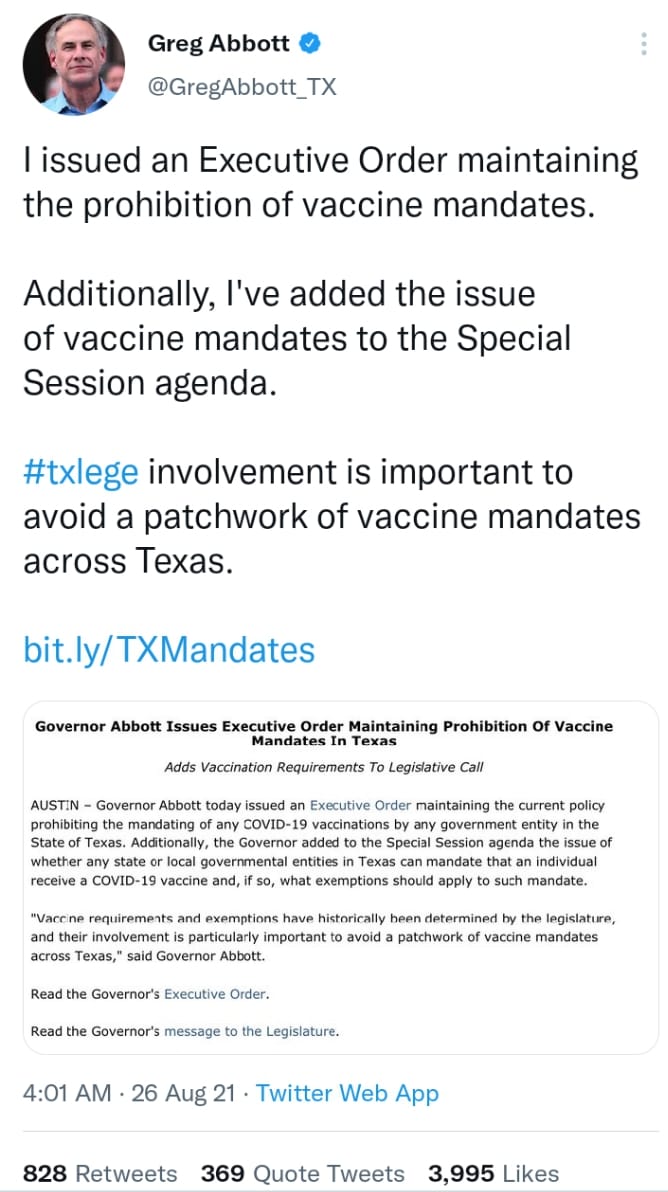 Democrats have already expressed their reaction as they branded the GOP governor’s latest move as “reckless.” Pfizer, on the other hand, raised eyebrows as it questioned the validity of Abbott’s orders regarding the vaccine ban.

The Republican governor has been in the news since he gave a mask mandate ban. The mandate has been a hot topic, following the surge of COVID infections in the state.

Nine counties, dozens of school districts, the city of El Paso, and some institutions have all moved to sidestep, defy, or even overturn Abbott’s earlier mask mandate ban.

As Dallas County obtained the court order to block the mask mandate ban enforcement, Dallas County Judge Clay Jenkins issued a statement Wednesday, saying: “Although this is an important victory, it’s really not a victory against a person or an entity. It’s a victory for humans who live in Dallas County against the virus.”