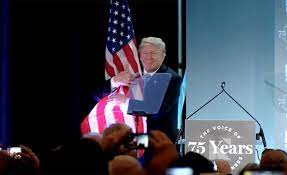 Former President Donald Trump has called his successor Joe Biden “possibly the most disloyal president in American history.” His comments come after the Biden administration canceled a July 4 fireworks display at Mount Rushmore in South Dakota due to fears over COVID-19 transmission.

“We had fireworks at Mount Rushmore that were so amazing… and it was wonderful, and then I saw the other day that they refused to let that happen again. I think they do, I believe,” the former president told Sarasota crowd Saturday night. “It’s so ridiculous. It’s so sad.”

Trump joked that the left intended to “cancel the heroes of Mount Rushmore” by replacing former President Thomas Jefferson’s picture at the Jefferson Memorial in Washington, DC, with that of Al Sharpton or Joe Biden.

Trump also chastised Biden for overturning his 1776 commission, which advocated for “patriotic education” in American schools, while also slamming Project 1619, which claimed the United States started with slavery.

Biden abolished Trump’s 1776 Commission on the first day of his tenure. The president appears to have taken a different point of view, appointing supporters of critical race theory to high-ranking positions in the U.S. government.

“We will not ignore what our intelligence agencies have determined to be the deadliest terrorist threat to our homeland today: white supremacy is terrorism,” Biden had stated in April.