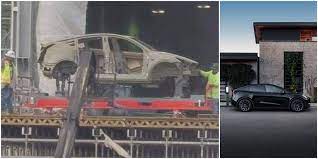 Photos of Model Y being manufactured in Tesla’s Austin production site called Giga Texas are making rounds online. Accordingly, this is in preparation for the initial production phases in Texas due by the end of 2021.

Giga Texas received a massive order of the vehicles Model Y and Cybertruck, reports say. Back in February, Tesla’s Austin production site received a big order of robots to help with the production of the orders.

Just last week, a local workforce leader visited Tesla in California and Nevada to evaluate and determine the workforce needed to be employed in Giga Texas. It is expected that 10,000 employees will be given new jobs through Giga Texas. Despite using robots for the manufacture of the vehicle, they still need to employ humans.

The photos were released by Tesla enthusiasts in Austin. The photographs seem to finally settle the debate about which vehicle will be produced first between Model Y and Cybertruck. Enthusiasts initially believed that Cybertruck would be produced first and Model Y will come next. However, Giga Texas may produce Model Y first because of the demand for it increasing recently.

The increase in the interest in Model Y is because of Tesla changing Vehicle Identification Numbers by the end of the second quarter. Because of the change, many of the Model Y vehicles were delivered to their local customers in California or nearby.

Cybertruck is likewise in demand. It can be ordered in bulk, and the need for Cybertruck was higher than the demand for Model Y before the production started.

There is still no confirmation by Tesla about which vehicle it will produce first. It is also possible, according to enthusiasts, that the Model Y being spotted in Giga Texas was for testing purposes only.