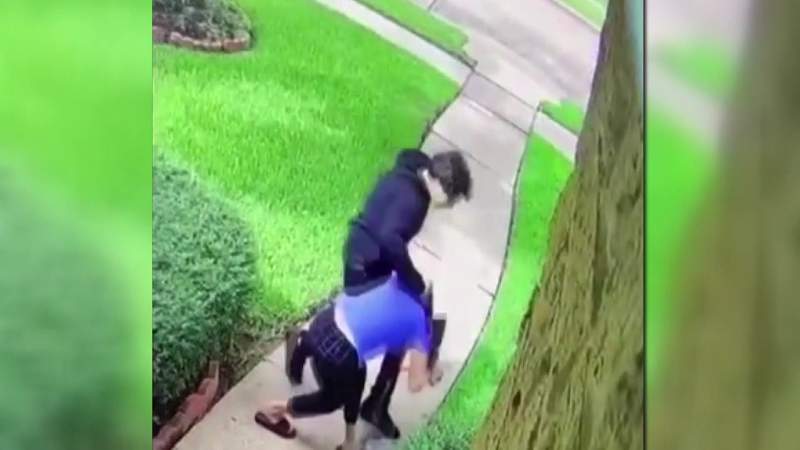 Two suspects of a brazen carjacking incident of a woman that happened on July 6 in west Harris County has not yet been identified or traced by the police which has left neighbors concerned about a repeat of such an incident.

Harris County Sheriff’s deputies are now seeking help from the public to help identify the suspects.

The incident happened near the house of the woman located in the 15700 block of Misty Heath Lane and surveillance video footage of the area has now been released by HCSO. The video shows the victim being followed by one of the suspects while she was opening the front door of her home.

The woman was threatened with a gun by the suspect and attacked her, deputies said.

The suspect who attacked her asked her to hand over her car keys to another man about whom the woman told the police, appeared to be in his teens, police said.

The two suspects took the car keys of the victim – a red Nissan, and fled the crime scene, the police said, quoting eyewitnesses.

The suspects then got involved in a minor crash at the intersection of W Little York and Queenston Blvd a few minutes later in which the suspects rear-ending a vehicle, deputies said.

According to the statement from a neighbor, Uchi Philips, who is also a witness of the incident, she was cooking outside of her house and she heard screams of the victim. At that point in time, she though one of the neighbors was in trouble. She immediately went out to help.

“I saw these two guys. One is like a teenager, I think, and the other is wearing a black shirt,” Philips said.

She said that initially, she thought that a fight had broken out between a neighbor and her sibling or boyfriend.

Police described one of the suspects as a man about 5 feet 5 inches tall and had a skinny build with dark curly hair. The other suspect was probably a teenager – 13-16 years of age, and about 5 feet tall.

Locals have been requested by the police to provide any information about the suspects to the Violent Crime unit at 713-274-9100.