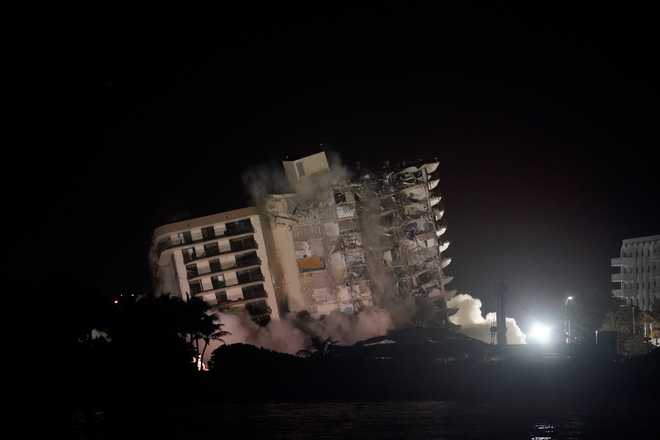 Days after the partial collapse of the Champlain Towers South condo building in Surfside, Florida, officers brought down the remaining damaged portion of the structure Sunday night in a controlled explosion. Search for the 121 missing people resumed within a few hours of the demolition.

The Sunday demolition was carried out on the 11th day since the horrific building collapse early June 24 in which so far 24 people have been confirmed dead. The demolition was ordered over safety fears as a tropical storm is expected to hit Florida.

Before the remaining structure was demolished, residents living in close proximity of the building were asked to stay indoors as a measure of extra precaution and close all windows, doors, and air intakes.

Miami-Dade County Mayor Daniella Levine Cava said the controlled implosion went “exactly as planned”, the Associated Press reported. “I feel relief because this building was unstable. The building was hampering our search efforts,” she said.

“However, there is dust and other particles that are an unavoidable byproduct of all types of demolition, and as a precautionary measure we’re urging residents in the immediate vicinity to stay indoors during the demolition,” she had added, according to CNBC.

According to the mayor, the demolition of the building was carried out with a technique called “energetic felling,” which uses “small, strategically placed explosives and relies on gravity to bring the building down in place.”

Meanwhile, Surfside Mayor Charles Burkett, appearing on Sunday’s “Face the Nation” on CBS, said that authorities were “still working with the mindset that this remains a rescue effort.”

He had said that bringing down the already damaged structure “would hopefully eliminate a potentially dangerous threat to workers and possibly open up an estimated third of the remaining pile to search and rescue teams,” CNN reported.

Amid concerns over the approaching Tropical Storm Elsa, which could reach Florida on Tuesday, Gov. Ron DeSantis has declared a state of emergency for 15 counties, including Miami-Dade County.

“We’re preparing for the risk of isolated tornadoes, storm surge, heavy rainfall, and flash flooding,” DeSantis was quoted as saying by CNN. The state has “begun executing contingency plans for the Tropical Storm Elsa and Surfside co-response,” he added.

In this article:Florida Building Demolished