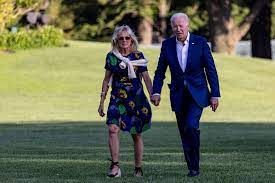 Even though President Joe Biden failed to meet his stated goal of having 70 percent of American adults vaccinated by July 4, he and First Lady Jill Biden welcomed 1,000 essential workers and military family members to the White House on Sunday for a barbecue on the South Lawn to celebrate the holiday.

The event was Biden’s first large event since his inauguration. “America is coming back together. Today, we’re closer than ever to declaring our independence from a deadly virus,” the president said.

The White House served hamburgers and other dishes to hundreds of invited guests, including essential workers who helped with the response to the COVID-19 pandemic as well as military families.

Reports said that after the White House event, a 17-minute fireworks display was expected to be set off from both sides of the Lincoln Memorial Reflecting Pool.

White House press secretary Jen Psaki on Friday said that the event would serve as a celebration of “our independence from the virus” and would act as a “marker of progress in the US’ response to the COVID-19 pandemic.”

Addressing the guests at the event, Biden urged unvaccinated people to get their jabs as Delta variant, which is said to be highly transmissible, is said to be spreading in the country. “My fellow Americans – it’s the most patriotic thing you can do,” the president stated.

Despite the initial well-paced vaccination drive, the Biden administration couldn’t achieve a goal of having 70% of American adults vaccinated by the July 4 holiday. Vaccination rates in the country have slowed down as there are many Americans who are still hesitant to get themselves inoculated. But the country did get close to the goal: 67% have had at least one shot.

Meanwhile, Sunday also marked one of the first times that fencing, which had been put around the White House during the anti-police violence demonstrations in 2020 and in the wake of the January 6 Capitol riot, was removed.

Visitors can now walk up to the North Lawn fence in front of the White House.