The Centers for Disease Control and Prevention is closely monitoring at least 200 individuals in 27 American states for possible contamination from monkeypox, a highly infectious disease, believed to have been brought into the United States by a person who came from Nigeria earlier this month.

The CDC, however, said that as of the moment, it is yet to detect additional cases other than what was found in the person who came from the African state.

In an advisory, Andrea McCollum in her capacity as head of the poxvirus epidemiology unit of the National Center for Emerging and Zoonotic Diseases, admits the difficulties experts are facing considering there are too many people scattered in 27 states that they should be monitoring.

“It’s a lot of people,” McCollum lamented. She, however, said that the CDC, in close coordination with the local health authorities from all 27 states, are already in the process of identifying and assessing the subjects.

Earlier this month, health authorities diagnosed a U.S. resident as positive for monkeypox. An investigation ensued from that point. In the course of tracing, health authorities were told that the contaminated individual flew from Lagos, Nigeria, and landed in Atlanta on July 9.

From Atlanta, the infected person was traced to have travelled to Dallas on the same day he arrived in Atlanta. It was only a week after that the individual sought medical attention at a Dallas-based hospital where tests had him positive for monkeypox.

Among those who form the list of being monitored are those who sat within six feet of the infected individual on the plane. Likewise under tight watch are those who may have used the mid-cabin bathroom on that flight, as well as the airline sanitation personnel, the flight attendants and family members in close contact with the subject while in Dallas.

“We define indirect contact as being within 6 feet of the patient in the absence of an N-95 or any filtering respirator for greater than or equal to three hours,” McCollum stated.

Web-based information hinted at monkeypox as an infectious disease caused by a virus that is deemed as causing more severe illnesses as compared to what smallpox does. The mortality rate from this disease is also considered alarming — one in every 10 cases.

Interestingly, monkeypox is not new to the U.S. as a large outbreak was reported back in 2003 when a shipment of animals from Ghana contained several rodents and other small mammals that were infected with the virus. The outbreak had 47 confirmed and probable cases in five states. 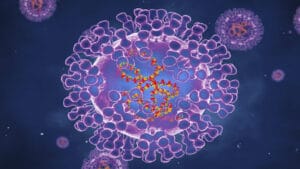