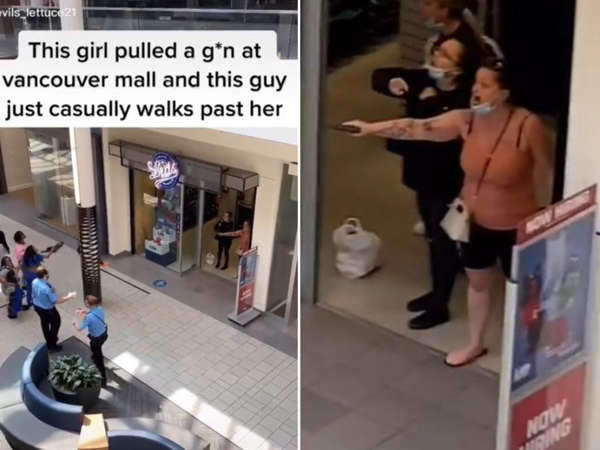 A white woman was seen pulling a gun on a group of Black teen girls in a shopping mall in Washington and the incident was captured by a TikToker user, sparking outrage.

In the viral video, the white woman can be seen arguing with the teenagers outside a Lids hat store at the Vancouver Mall in Vancouver, Washington. Both sides look agitated and enraged at each other. There were incoherent shouting and chaos around at the time of the incident.

The white woman pointed a gun on the teenagers

But, as a bystander, named Theo, zooms in on the chaos, the white woman can be seen pointing a gun at the group.

The mall security personnel can be seen arriving on the spot and trying to de-escalate the situation. Despite this, they are unable to recover the pistol from the white woman.

A bystander seemed unaffected by the weapon and is shown strolling past the gunwoman to enter the Lids hat business.

“This girl pulled a gun at the Vancouver mall, and this guy just casually walks past her,” TikToker Theo captioned the video.

People were shocked by the scenario, which has already surfaced with over 8.6 million views and likes.

A second CCTV footage of the same incident was uploaded

Meanwhile, another CCTV footage of the same incident was uploaded on Twitter from a different viewpoint.

In this video, the woman was also seen pointing the gun at the teenagers while walking out from the Lids hat store. Here also, incoherent chaos was being heard.

The youngsters walked out through the exit point of the mall recklessly.

According to the Vancouver Police Department representative, no individual was hurt in the altercation, and the lady’s gun was found to be empty during the event.

In this article:Vancouver,viral,Washington,Woman Points A Gun On A Couple Of Black Teens