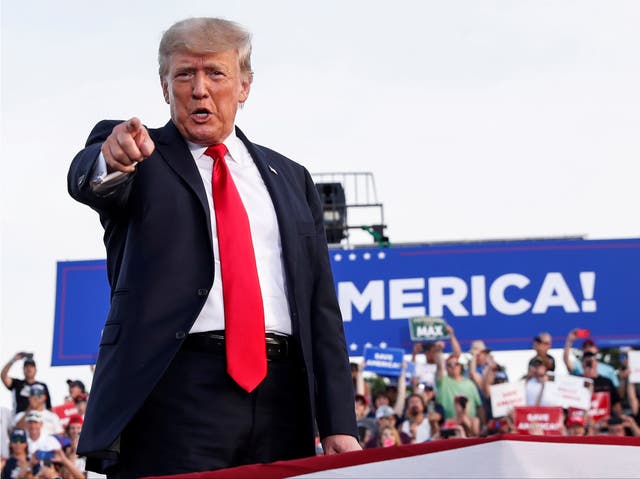 Before his first post-presidential rally on Saturday, CNN reporter Donie O’Sullivan chose to speak with many supporters of former President Donald Trump, most of whom told him they keep expecting the real estate mogul to be reinstated before the end of summer and cautioned of possible political violence in America if he is not.

“He didn’t lose, I know he didn’t lose,” one woman told O’Sullivan, indicating that she believes unfounded claims made by Trump and other Republicans that widespread voter fraud led to an unfair election that swung in President Biden’s favor.

Trump Fans Believe That He Is Coming Back Soon Plenty of Trump fans who assembled in Wellington, Ohio, on Saturday wore memorabilia and held placards with messages like “Trump won” and “Biden sucks” written on them.

“But he lost in 2020, right?” O’Sullivan asked the woman about the voting results.

And the woman responded with a no.

Even before gathering, the third set of Trump fans said the one message they wished to hear from the former president was that “he’s coming back.”

Trump is said to have been pressuring conservative media allies and other confidants to promote his assertion that the election was rigged and that he would be reinstated as soon as August. There is no system in place to allow for such reinstatement.

Ron, a Trump supporter in Wellington, informed O’Sullivan, prompting laughs from the rest of his company that Trump is coming back soon, and others are on their way down. He even added that Trump would be coming back before August.

“And what if that doesn’t happen?” O’Sullivan asked.

They’ll be in a civil war, according to Ron, since the militia will take over.

A self-described representative of the right-wing Three Percenters militia group who witnessed the event told O’Sullivan that he was at the U.S. Capitol on Jan. 6, when a crowd of Trump fans stormed the building and briefly prevented a joint session of Congress from certifying Biden’s Electoral College victory.

At least six Three Percenters members have been charged with plotting to strike the US Capitol on that day.

“Yeah, I don’t think anybody should have gone inside, but when you’re worked up at the moment and the adrenaline is pumping, you know, it just happens,” the man in a Kevlar vest said.

One woman informed O’Sullivan that she thought the insurgency on Jan. 6 was fully “manufactured.”

O’Sullivan questioned the self-declared militia member if he thought there will be more violence in the wake of Trump’s election in 2020.

The man responded that he believes that it is coming.